Hot Sulphur Springs was originally a summer campground for Indians who came for the hot springs. When Grand County was formed, it was the first county seat from 1874 to 1882, after which it moved to Grand Lake. The county seat returned in 1888 and has been here ever since.

The town was established in 1860, making it the oldest town in the county. It was originally named Saratoga West, and sometimes called Warm Springs, but in 1863 the name was changed to reflect the hot springs in the area.

The town site was bought by William Newton Byers, founder of the Rocky Mountain News, in 1864. He wished to make Hot Sulphur Springs a spa and resort. Byers went on to survey, plat, and name the streets of the town, and it became incorporated April 1, 1903.

William Byers original family cabin is located at 204 Byers Avenue, along what is now Highway 40, and still exists to this day. The building is currently the county’s only mortuary.

Hot Sulphur Springs, Colorado held the first Winter Carnival west of the Mississippi River in December, 1911. This is considered to be the beginning of the ski industry in Colorado. The original carnival featured ice skating, tobogganing, cross country skiing, and a ski jump exhibition by Carl Howelson.

The enthusiasm surrounding this event led its organizers to hold the 1st Annual Hot Sulphur Springs Winter Carnival six weeks later in February, 1912. Colorado’s ski legacy was born and this is “Where It All Began.” The Grand Winter Sports Carnival celebrates the prominent role of Grand County in the heritage of skiing.

Early photo of the Riverside Hotel on Grand Avenue across from what is now the post office. Today, the building is a private residence. 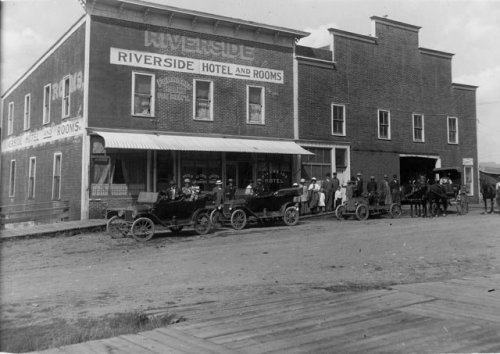 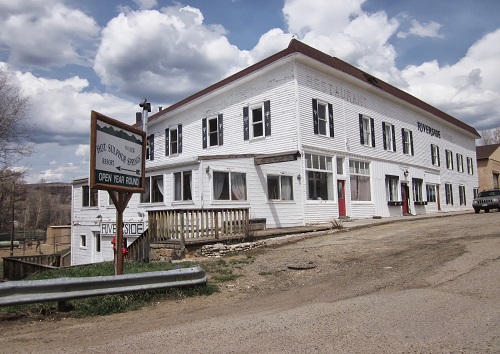